Tell Jason Furman and President Obama: Working for free is not a jobs plan! 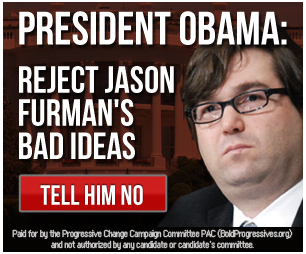 The American Prospect reports that White House economist Jason Furman is pushing President Obama to adopt a "jobs plan" that asks the unemployed to work for free as corporate interns.

As the President prepares for his big jobs speech for Thursday, he needs to know Furman's advice is not credible and is rejected by the public. Please sign this statement today, on the right:

Asking unemployed Americans to work for free is not a "jobs plan." The President should propose massive government investments that put Americans to work -- and pay these workers fairly. Jason Furman's bad ideas should be rejected.

As the media write about Obama's upcoming speech, we'll tell them about this statement -- so the White House gets our message. Sign on the right.