Michigan Republican Speaker James Bolger and Majority Leader Jim Stamas silenced two women legislators for saying "vagina" and standing up for women during a debate about women's reproductive rights. Sign the petition demanding that Michigan Republican House leaders apologize and restore the legislators' right to speak on the House floor. 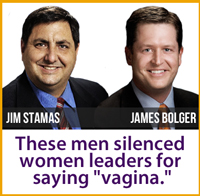 "It is unacceptable to silence female legislators for saying 'vagina' in a debate on women's reproductive rights. We demand that you issue an apology to Representatives Lisa Brown and Barb Byrum, and state publicly that their right to speak out has been restored."