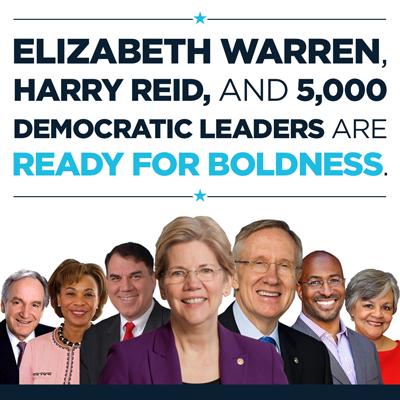 We want the 2016 Democratic presidential nominee to campaign on big, bold, economic-populist ideas that tangibly improve the lives of millions of Americans.

We urge all candidates for president to campaign on big, bold ideas – such as establishing a national goal of debt-free college at all public colleges and universities, expanding Social Security benefits instead of cutting them, creating millions of clean-energy jobs, reducing big-money influence in politics, breaking up the “too big to fail” Wall Street banks that crashed our economy, and ensuring that working families share in the economic growth they help create.

Bold economic populist ideas are popular with Democratic, Independent, and even Republican voters -- and are key to victory in 2016.

Below is a list of 5,000 elected officials, Democratic Party officers, union leaders, and grassroots activists who have signed this statement, including Senate Democratic Leader Harry Reid, nearly 200 state legislators and 25 members of Congress.

Would you chip in $3 to help get volunteers organized in Iowa and New Hampshire?