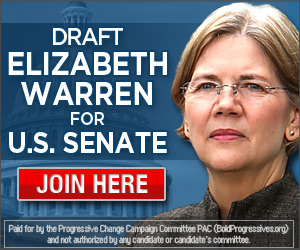 Paul Wellstone used to say he could use ten more progressives in the Senate -- "or one Elizabeth Warren."

Elizabeth Warren has a track record of holding Wall Street accountable and fighting for regular people like us. Now, she's thinking about a run to win back Ted Kennedy's Senate seat from Republican Scott Brown in 2012. Let's tell her she'd have our support!

Join the "Draft Elizabeth Warren for Senate" movement. Sign up on the right.