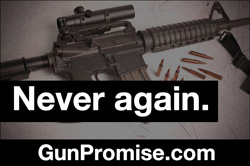 "I will call the White House and Congress once a month until common-sense gun legislation is passed."

Sign on the right. Our first calls will be on January 4, 2013 -- the first full day of the new Congress.