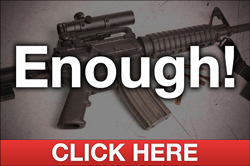 Enough is enough. Senator Dianne Feinstein (D-CA) promised to re-introduce her assault weapons ban -- which had been in effect for 10 years until expiring in 2004. Can you help pass it and other sensible gun laws?

PETITION TO CONGRESS: "Congress must pass an assault weapons ban and other sensible gun laws in 2013. It must not be afraid of the gun industry. Our children's lives are too important to ignore this issue, and I will stay involved in this fight until we win."